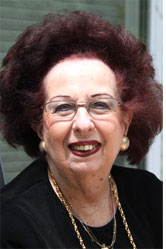 Bettina Graf was born December 1927 in Vienna Austria. After the Nazi occupation, she experienced "Kristallnacht", which took place on November 9th & 10th, 1938 when the Nazi's burned synagogues, vandalized Jewish homes and businesses and the first mass arrest of Jewish men and boys took place. At the time Bettina was in school from which she was subsequently thrown out. Bettina's father had gone into hiding and her mother and sister were arrested for a while and then later released.

In the summer of 1939, after living under the Nazi occupation for a year and a half, Bettina's whole family was finally able to obtain passage on the last boat that left from Belgium to England. They lived in London during part of the intensive German bombing known as the "blitz" until September 1940. At that time they found passage on a ship to the U.S. Although the Nazis torpedoed the ship they were fortunately saved. After the ship was back in port and repaired they boarded it once again and finally reached the U.S.

Bettina's presentation will cover her life under the Nazi occupation as well as her experience during the "blitz" in London, and being on a ship, which was torpedoed.