We can arrange for a Holocaust Survivor to speak via Zoom! 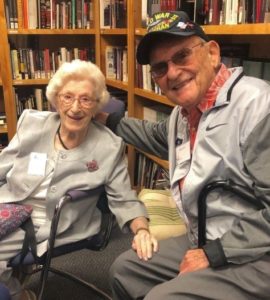 Our most powerful and compelling teaching resources

HHREC's Speakers Bureau is a group of  Holocaust Survivors and Liberators, including those featured in the film Testimony of the Human Spirit.

These courageous men and women bring their personal experiences into the classroom, putting a human face on the lessons of the Holocaust. To date they have reached an audience of more than 100,000 students, teachers, and community members.

Junior at The Masters School in Dobbs Ferry

Every April, on the day of remembrance, Yom Hashoah, Jews all around the world remember the 6 million who died during the Holocaust.  They were tortured, treated like animals and slaughtered.  Many people ask why they should care.  The Holocaust ended 65 years ago, right?  Why are Jews still dwelling on the past?

It is essential to talk about the Holocaust.  It is not just the story of 6 million Jews who died brutally.  It is the story of gay people, gypsies, and communists, all slaughtered because they were different from the Nazis.  It is the story of a world that turned away with indifference as people suffered.  Most importantly, it is the story of brave people who helped save lives while putting themselves at risk, those who refused to be apathetic, those who chose love over hate.

The reality is, though, most young people today know little about the Holocaust.  There are even some, like the President of Iran, who deny that it happened.   But holocausts and human rights violations are still going on: Ukraine, Armenia, Rwanda, Sudan, the list goes on.  It is our responsibility to end these genocides by learning from history and remembering.  Hearing about the Holocaust every year can teach us not only about evil and how people suffered, but also what the slaughtered people stood for, education, freedom, and tolerance.

It is our responsibility to discuss the Holocaust.  We, as a generation, must learn never to be silent when human rights are ignored and evil occurs.  We must learn to speak out against what we think is wrong.  We must be involved.  We must teach tolerance and eliminate indifference.  These are the lessons of the Holocaust, and they are still relevant today.

Writing about Ed Lessing, member of the Speakers Bureau 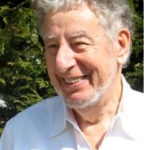 Today a Holocaust Survivor, age 87, spry and full of life, braved the icy NYC cold to visit an all girls public high school to talk about his story of survival as a Hidden Child. He spoke with warmth, and told of his pre-war happiness in Delft, Holland. He remembered the feeling that his childhood had ended when he was punched in the face by a Nazi. As he fell to his knees, bloodied and dazed, the aggressor uttered the words: “dirty Jew.”

The day Germany invaded is etched on this future artist’s mind.  He recounted the sight of billowing, beautiful parachutes filling the sky, and innocently concluded it was a Dutch military exercise. Two days before, he had celebrated his 14th birthday. His parents managed to afford a used kayak, and an eager Eleazar (from the Hebrew meaning “God is my help”) looked forward to idyllic days spent paddling the silky waters of Delft’s canals.

When Ed (Eleazar) Lessing’s parents were faced with  orders to report to a work camp amid growing alarm that rumors were true about such places ( incredulously, later revealed to be a death camp), his parents made the brave decision to save their lives by going into hiding.  Young Ed roamed the Dutch countryside with dyed red hair until his mother arranged for fake papers and a stable boy job. She found a family willing to take in his two little brothers, while she and her husband hid apart. As Mr. Lessing spoke, the school girls were glued to every word. He held them with the weight of “the world’s worst genocide.”  His genuine, congenial nature pulled them in.

By age 17, Ed was living among a close-knit group of resistance fighters in a rugged hut deep in the forest. Again, his courageous mother had played her part in finding her son yet another hiding place. One fateful night, while on watch with Buddy, a shaken Ed risked his life to run back to the hut to warn those sleeping as, “the narrow headlights of many enemy trucks came at them in the half light of dawn.” For a lifetime, Mr. Lessing believed his comrades (including Buddy) had been captured and killed, only to find out, on a sojourn back to Holland, that all had escaped .He was fortunate enough to meet two. Surprisingly, Buddy went on to become a Catholic bishop who built health clinics in New Guinea .Mr. Lessing paused, smiled at the intent audience, and reflected, “I guess my actions make me a rescuer too.” The circle of girls smiled back. He challenged them to go out and “be rescuers in the world.”

Ed’s own escape, while surrounded in the treacherous woods by Nazis, was orchestrated by his beloved mother. Incredibly, she had found her son the night following the raid, and hatched a plan to save him. They exited the woods posing as a giggling couple, arms draped around one another, convincing an armed soldier to let them pass. The teen girls listened in hushed attention. When Ed Lessing speaks of his mother, his pride and love fills the room. His story telling, free of bitterness, and infused with all that is good about humankind’s noble spirit, does more to build bridges than a UN Conference.

One third of the students at The Young Women’s Leadership School of Astoria are Muslim. No Jewish children attend the school. Remarkably, the teen girls chose the Holocaust as their only topic of study for a two week immersion. A gallery exhibit is planned for culminating writing and art pieces. The class of 25 visited a synagogue this week as part of their studies. The rabbi welcomed them so lovingly, characterized their teacher, Ms. Henry, that one student remarked, “How could anyone feel hatred toward Jewish people? I just don’t understand.”

Mr. Lessing spoke for one hour and a half using oversized photographs, and his own sketches to bring the story to life. Because his parents and two brothers survived, it felt like a happy ending intertwined with the gravity of a world gone insane around them. On this crisp December morning in Astoria, it felt like the world stopped spinning. It felt like hatred lost the battle and humanity triumphed.