The Survivor Legacy Education Project is an interactive database to record the oral history of Westchester Survivors for use by teachers with their students and adults. The HHREC has interviewed these Survivors and created both audio and visual accounts of their stories and will edited into a  program in which their personal effects: photographs, letters, artifacts of their childhood and the war years (e.g. Stars of David), personal papers (e.g. passports, etc.) will be offered to illustrate the lives of these brave individuals. Click here to read more about this project and view their stories.

Two Holocaust Survivors Share their Hopes for the Future 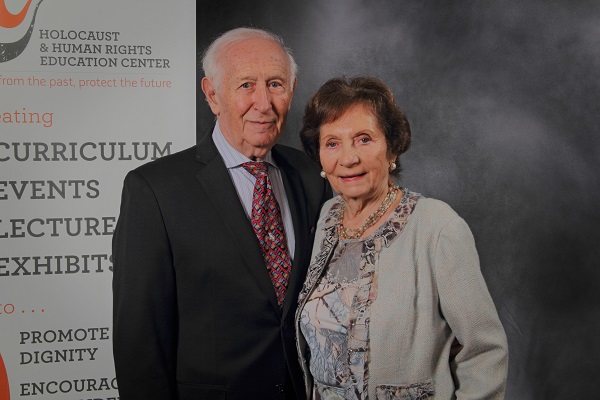 Jerry Kaidanow was born in 1933 in a small shtetel called Krivitchi Poland in what is now Belarus. In April of 1942, his parents, Eliahu and Sarah Kaidanow were both murdered by the Nazis. Jerry along with his older brother Howard fled to Kurenets where they took refuge with their aunt’s family. Later that year Jerry and his family escaped the liquidation of Kurenets by hiding in the Naroch Forest for the remainder of the war.

Jerry arrived in the United States on June 22, 1947. He attended Roosevelt High School. On November 29, 1952 he married his wife Ellen who is also a Holocaust Survivor. Jerry served in the U.S. Army. Upon his discharge bought a bakery business and attended night school to become a real estate sales person. In 1963 he sold the bakery and purchased a Carvel Ice Cream store. Continuing his real estate education he ultimately attained his broker’s license and went on to have a successful real estate career.

Ellen Kaidanow was born Shifra Leviatin in Dubno, Poland on June 15th, 1936. Ellen’s parents were Ester Greensveig and Yosef Leviatin. She had two sisters, an older sister Perel, and a younger sister, Bela. All of her immediate family were killed in the liquidation of the Dubno Ghetto. Ellen survived because of the bravery of her nanny Lena Dudzinsky. Lena took Ellen from the Ghetto and presented Ellen to the world as her illegitimate daughter.

After the war Ellen immigrated to the United States. She attended Taft High School and eventually met her husband Jerry (also a Holocaust Survivor).

Jerry and Ellen have three children and seven grandchildren. They live in New Rochelle N.Y.