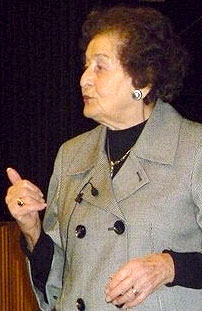 Judy Altmann was born in Jasina Chechoslovakia, which was invaded by the Nazis in 1939. In 1944 she was arrested and sent to Auschwitz concentration camp and on to Essen and Gelsenkirchen Labour camps where she remained until March 1945. From there she was transported to Bergen Belsen concentration camp.

In May 1945 Mrs. Altmann was liberated by the British Army and given the opportunity to go to Sweden.  She lived in Sweden until 1948 at which time she immigrated to the United States 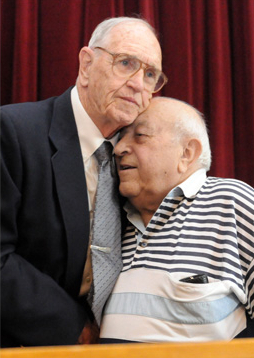 Dr. Moshe Avital was born in Ruthenia Czechoslovakia, which was annexed by Germany in 1939. At the age of 14 Dr. Avital was sent to the Berehovo Ghetto, Hungary in April 1944.

During the Holocaust he was imprisoned in Ghetto Berehovo (Beregszas in Hungarian).  From there he was deported with his entire family to Auschwitz, Poland, transferred to Plazow, then to Gross Rosen, then to Bolkenheim, then to Reichenau, and finally to Buchenwald, Germany.  There the United States Third Army liberated him on April 11, 1945.

Mrs. Bachner covers her experience on Kristallnacht, fleeing to Belgium, her life in hiding first with a family and then in a convent, and life after the war's end in Brussels until she reached the US. 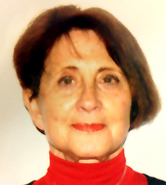 AT the end of December 1942, her parents, Fernad and Renee Levy, and 4 year old Arlette were arrested in their apartment by two French Nazis.

Arlette's father was able to bribe the two men.  They let her go with the maid to her grandparents.  This saved her life.  Her parents were taken to the concentration camp Drancy, a suburb of Paris, and then deported to Auschwitz where they were put to death in February 1943.

Melvin Federbush was born in Deblin, Poland, July 1923. He attended Cheder and Yeshiva as well as high school. Within eight days of Hitler's invasion of Poland, his parents and nine year old twin sisters were killed during a bombing attack. Melvin was taken prisoner during the Nazi occupation and forced to live in ghettos and concentration camps including Triglitz and the infamous Buchenwald. 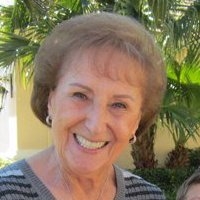 Elsa Stern Federbush was born in Svalana, Czechoslovakia in 1930.  She lived with her mother, father and three siblings before they were forced into the Mukacevo ghetto in Czechoslovakia when Elsa was just 13 years old.  She was deported via cattle car to Auschwitz II-Birkenau in Poland and eventually put on a Death March which ended at Ravensbruck Concentration Camp in Germany.  In 1945 Elsa was liberated by the Soviet army at which time she returned to Czechoslovakia.  In 1946 she was part of a group of 50 boys and 50 girls who were sent to England for schooling.  Elsa met her husband, Melvin, in Israel and immigrated to the United States in 1956.

Esther Geizhals was born in Lodz Poland in 1929. At the age of 10, she and her family were moved to the Lodz ghetto where they lived under terrible conditions until 1944. At that time Mrs. Geizhals was transported to Auschwitz extermination camp. Six weeks later she was moved again to Bergen Belsen and on to Rochlitze concentration camp in Czechoslovakia.  In 1945, as the allies were advacinig, the whole cmap was made to walk for days without food or drink and just a few hours of sleep on the fields.  Many died and later this was known asa the Death March.  Mrs. Geizhals and four other people escaped during the Death March and worked their way to the next village where they were liberated by the Russian Army.  Eventually she managed to get back to her hometown of Lodz in the hope of finding any survivors of her family.  She was very fortunate to find her father, who was the only survivor of her family and relatives.

Mrs. Geizhals smuggled her way from Poland to the American Zone in Germany, where she lived in a displaced persons camp until 1947 at which time she came to the United States with a youth group.

Clara Deutsah Knopfler was born in Transylvania, Romania on January 19th, 1927.  Clara's immediate family consisted of her parents, brother and herself, however, both parents came from large families.
Clara grew up in a little town in North Seron, Romania where she attended school until March 1944 (Jewish students were not longer able to attend school). By April of that year, Clara and all other Jewish residence were required to wear yellow stars.
In May of 1944, Clara and her family were taken away to work for the Germans in camps and factories with no pay. They all lived in terrible conditions in the “ghetto” for three weeks. Clara and her family were then taken to Auschwitz. When they reached Auschwitz they were all separated with the exception of Clara and her mom. Out or 39 family members that were sent to Auschwitz, only Clara and her mother survived.
Clara Deutsah Knopfler's "Testimony of the Human Spirit" (DVD) Interview Transcript

Lola was born on April 12th, 1930 in a little town of Zalastucky in Poland which is located near the Romanian border in the southern part of Poland.  Lola’s father was a beer distributor and her mom was a housewife, however, her mom helped out in her father’s business.

Lola, her brother, and both parents survived the Holocaust.

Mr. Sommer was born in 1927 in Makachelo a small village in Czechoslovakia. He was 14 years old when he was forced into a Nazi labor camp from which he escaped just before he was to be shipped to concentration camp Auschwitz. He was in the involuntary service in the Soviet Army and has lived through many harrowing experiences, which he describes in his book "Journey Through the Golden Door".
He came  to the United States in 1948 and ultimately became a teacher and National Teacher of the Year in 1981-82.  This led to an invitation to serve on President Reagan's National Commission on Excellence in Education.
Jay Sommer's Interview 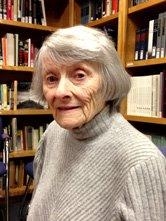 Lore Strauss was born in Newburgh, Germany in 1923.  She lived in an upper middle class family.  Lore's family left Germany in 1933 due to Hitler's arrival.  They moved to Paris but her mother was unhappy and moved her family back to Newburgh, Germany in 1934.  Lore's family resumed their lives back in Newburgh until the laws were put into effect.  They moved back to Paris in 1938.  After years of moving around, Lore made it to New York on January 29, 1947.
Lore Strauss Interview