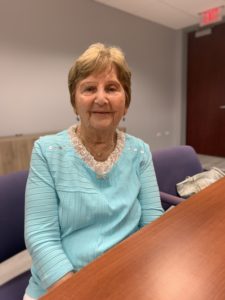 Judith was born in Vilna, Poland, now Vilnius, the capital of Lithuania. Until the Nazi invasion in June, 1941, Judith lived a wonderful life with her mother, father and brother. Within a few weeks, her life and that of her family changed completely.

In September of 1941, Judith and her family were forced into the newly formed ghetto, leaving all their possessions behind. The rest of Judith’s extended family never made it to the ghetto. They were taken to the Ponary Forest where they were murdered and thrown into pits.

The ghetto was liquidated in September 1943 and most of the remaining Jews were sent to death camps or concentration camps. Judith, her mother and her Aunt Freida were shipped first to Kaiserwald, a camp in Riga, Latvia and later to Stutthof, another concentration camp in Germany. After a short stay, they were sent to Torun, Poland for slave labor. In the winter of 1945, they were liberated by the Russians. Unfortunately, Judith’s father did not survive but her brother did and they were eventually reunited. After the war, they spent time in a displaced persons camp in Germany where Judith met her future husband, Harry, also a Holocaust survivor. They eventually received permission to emigrate to the United States. Judith and Harry have two children and three grandchildren.

Judith is an artist, a composer, lyricist, poet, writer, therapist, teacher who uses her painting and art as a way to communicate her childhood in the Vilna Ghetto and concentration camps. As a classically trained musician, she has composed numerous Holocaust songs with lyrics, and many classical pieces for piano and orchestra. She has published two art books, “Images of My Childhood from Sorrows to Joys” (2002) and “The Voice of Color” (2012). Judith’s art is displayed in several prestigious Holocaust museums.