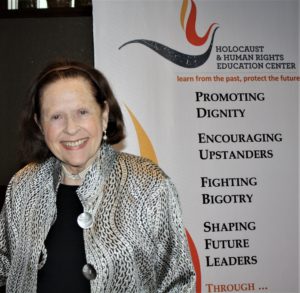 Sylvie Lednicer was born in Antwerp, Belgium in 1939. The Germans invaded Belgium in May 1940. Ms. Lednicer lived under the occupation until age 3. Her parents were then able to place her into hiding with a catholic family, with whom she stayed for 2 ½ years. Apart from her grandmother, her whole family died in Auschwitz concentration camp. She was returned to her grandmother at the end of the war and subsequently they both joined an aunt in the U.S.

Ms. Lednicer's presentation covers her experience during the occupation, in hiding and later in the U.S.