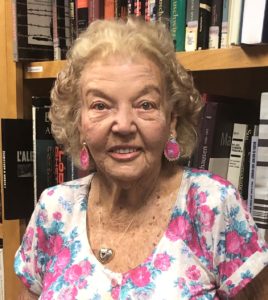 Lena Casuto Goren was born in Salonika, Greece in 1930. Her family moved to Larissa when her father became the Chief Rabbi of that city. She was nine years old when war came to Greece, and eleven when the mayor warned Rabbi Casuto of the imminent deportation of Larissa’s Jews to German concentration camps. Her family (and eighty-three others) fled to the mountains of Tzouma where they hid in an isolated monastery for the rest of the war. At the age of seventeen, Lena immigrated to the United States with her family. She married, raised three children, and despite having only a third-grade education, she earned a high school diploma. She worked as a seamstress, hairdresser, and a Greek and Spanish interpreter for the court system. She is a former Miss Senior America finalist and the current co-leader of The Melodians, an all-senior chorus which performs at venues across Queens.