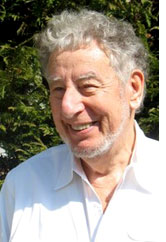 Mr. Lessing's presentation covers life in Holland after the occupation, his experience in several hiding places, as a resistance fighter living in the forest and life in Holland after liberation. Mr. Lessing has lectured on TV and Radio in the US and Holland, has interviewed for the Spielberg Shoah Foundation and writes for the Hidden Child Foundation. He speaks in schools and numerous organizations.