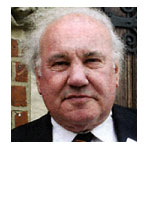 Denny Jacobson’s family after escaping from Berlin settled in Epsom, UK. He attended Epsom College and  was in RoseberynHouse  from 1952 to 1957.  He gained a BSc in Engineering from University College, London.  In 1961 he joined IBM UK as a systems engineer and was with the computer giant for most of his life – in Jamaica, Mexico, Paris, Milan and the USA.  He retired in March 1997 but still does consultancy for IBM.  Denny is very involved in charity work, including fundraising for research on Parkinson’s disease and is helping support groups for Holocaust Survivors.  Denny’s interests include music, sailing, cooking, travel, reading and languages