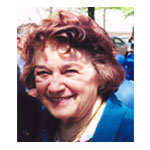 Clara Knopfler was born in Romania, Transylvania and later lived in Hungary. In 1944, she was taken to a ghetto and subsequently transported to Auschwitz, then Riga concentration camp and later to two labor camps in East Prussia. After a long "Death March" she was liberated in January 1945. After Liberation, she had to endure a 3-month long walk back to Romania because there was no transportation. In 1962 she immigrated to France and finally to the United States.

Mrs. Knopfler's presentation covers her journey. She speaks frequently in schools, churches, temples and colleges and her book "I Am Still Here: My Mother's Voice" was published in 2007.