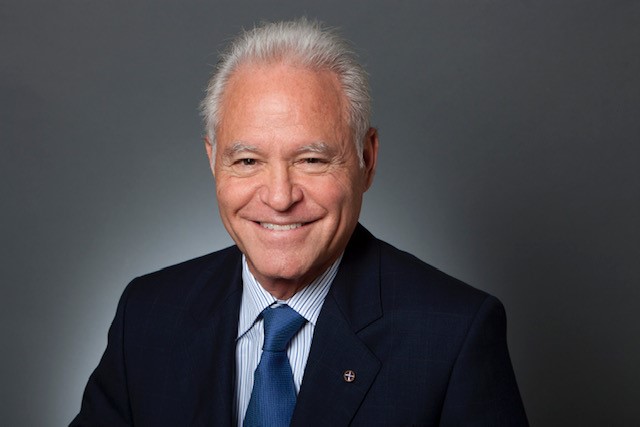 Dennis Mehiel, formerly a twenty-year Westchester County resident, is the Managing Member of Four M Investments, LLC, headquartered in White Plains.  Four M is a Private Investment Firm that manages only family funds, focused on early-stage technology, food service and corrugated packaging.  He is the Chairman and CEO of Delmarva Corrugated Packaging, Inc.

Mr. Mehiel is the former Chairman, CEO and Principal Shareholder of Box USA, which he founded in 1966. When sold to International Paper Box USA was then the Nation’s largest independent producer of corrugated shipping containers operating 22 corrugated packaging facilities and two containerboard mills, all located within the continental United States.   Mr. Mehiel is also the former Chairman, CEO, and Principal Shareholder of Sweetheart Cup Company, which was then North America’s largest producer of disposable tabletop products for the away-from-home dining market.  Sweetheart was rescued from insolvency when acquired by Mr. Mehiel in 1998, and was divested to its principal competitor, Solo Cup Company in 2004.  More recently, Mr. Mehiel has begun development of a small number of large capacity capital intensive “Alpha” Corrugated Manufacturing Facilities, the first of which began operations in late 2021 at Dover, Delaware.

Mr. Mehiel has long been active in New York State political and civic life.  He served for 12 years as a member of the Democratic National Committee, is a former Chairman of the Westchester County Democratic Committee, was an Officer and Director of the New York League of Conservation Voters. He was the Democratic Nominee for Lt. Governor in 2002 and was the New York State Chair of the Kerry Presidential Campaign in 2004.  From 2012 until 2017 Mr. Mehiel served as Chairman and C.E.O. of The Battery Park City Authority (BPCA), which operates a 92 Acre property at the south end of Manhattan created when the World Trade Center was constructed 40 years ago.

Mr. Mehiel is a former Member of the Board of The Milano School for Management and Urban Policy at the New School, a Member of Business Executives for National Security and a former Trustee of the Westchester Medical Center.   From 1989 until 1993 he was a Trustee of the Windward School in White Plains, one of the region’s premier providers of education for learning disabled children.  He also served for ten years as a Trustee of the Purnell School in Pottersville, N.J., an independent high school for girls who have not succeeded in a traditional competitive academic setting.  Mr. Mehiel was the first person not of the Jewish faith ever elected to the Board of Governors of Yeshiva University’s Wurzweiler School of Social Work where he served from 1989 until 1996.

Mr. Mehiel is a member of the Holy Trinity Cathedral in New York City.  Until recently he served as the Chairman of Friends of St. Nicholas, charged with managing the construction of The Saint Nicholas National Shrine, which replaces the only House of Worship lost during the attack on September 11, 2001.  The Shrine was Consecrated July 4, 2022.   He is a former member of the Archdiocesan Council, the Lay Leadership of the Greek Orthodox Church of the Americas.  He is an Archon of The Order of Saint Andrew the Apostle, the world’s oldest Lay Religious Organization and a recipient of the Medal of St. Paul, the Highest Honor a lay person may receive from the Greek Orthodox Archdiocese of America.

Bret Stephens is a Pulitzer Prize-winning journalist and columnist with the New York Times, and the honoree is Dennis Mehiel, Principal Shareholder and Chairman of U.S. Corrugated, Inc.  Stephens joined The New York Times as an Op-Ed columnist in April 2017. Mr. Stephens came to The Times after a long career with The Wall Street Journal, where he was most recently deputy editorial page editor in charge of international opinion and, for 11 years, the paper’s principal foreign-affairs columnist. Before that, he was editor-in-chief of The Jerusalem Post. At The Post he oversaw the paper’s news, editorial, digital and international operations, and also wrote a weekly column. He has reported from around the world and interviewed scores of world leaders.

Mr. Stephens is the author of “America in Retreat: The New Isolationism and the Coming Global Disorder,” released in November 2014. He is the recipient of numerous awards and distinctions, including three honorary doctorates, the Ellis Island Medal of Honor, and the 2013 Pulitzer Prize for commentary. In 2022, the government of Russia banned him for life from visiting that country. He was raised in Mexico City and holds a B.A. from the University of Chicago and an MSc. from the London School of Economics. He and his wife, Corinna da Fonseca-Wollheim, a music critic and entrepreneur, live near New York City and have three children.

To register for this event, or for more information including sponsorship opportunities visit the HHREC website hhrecny.org, email benefit@hhrecny.org or call 914.696.0738.