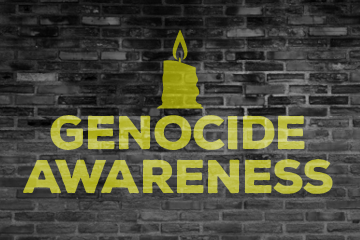 The 20th Century is often referred to as the “Century of Genocide.” Unfortunately, this trend has continued into the 21st Century. Many of these genocides either began in April or include significant events which occurred in April.

The Holocaust & Human Rights Education Center would like students to raise awareness about these genocides and remember those who were lost as a result of “man’s inhumanity to man.” To this end, we are sponsoring a special student contest.

Create an original project in visual arts, poetry, music, or other media of artistic expression that commemorates some aspect of a genocide which has occurred in the 20th or 21st centuries. Examples include the Armenian Genocide, the Holocaust, the Cambodian Genocide, the Bosnian Genocide, the Rwandan Genocide, the Genocide in Darfur, and many others. Please see World Without Genocide (www.worldwithoutgenocide.org)  for a complete list.

Deadline for submission of projects: April 30, 2023.  Projects, with this simple information sheet, need to be submitted by email to jscallero@hhrecny.org

We will select winners (for grades 7 and 8, for grades 9 and 10, for grades 11 and 12) who will receive a certificate and will have their projects announced on our Facebook and Instagram pages.  Additionally, HHREC will donate, on the winners’ behalf, to Feeding America, the largest hunger-relief organization in the United States. Their mission is to advance change in America by ensuring equitable access to nutritious food for all in partnership with food banks, policymakers, supporters, and the communities they serve.

We look forward to viewing your submissions and hope you continue to stay well during these uncertain times. Questions: please email Julie Scallero at jscallero@hhrecny.org 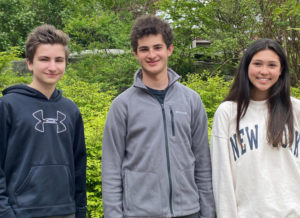 Evan Bonnet – Rotolo Middle School – Batavia, Illinois
Original Sculpture, “Persistence and Strength” of a hand symbolizing how the Tutsis reached out to the world for help during the Rwandan Genocide but none came.

Jackson Forsberg – Somers High School
Original Poem, “It Should Not Be This Way” memorializing the victims of the Bosnian Genocide

First Place: Claire Nevin – South Kamloops High School – British Columbia, Canada
Original Art, “Hope and Despair” depicting the butterfly which was a meaningful symbol to the people impacted by the Srebrenica Massacre during the Bosnian Genocide

Congratulations to our winners and to all the students and their teachers who so hard on their  projects this year, we are proud of all of you and appreciate the effort you gave in making this a very special program!

Students are invited to create and submit an original project in visual arts, poetry, music, or other media of artistic expression that commemorates some aspect of a genocide which has occurred in the 20th or 21st centuries.

HHREC donates on the winners’ behalf to the Afya Foundation, a Westchester-based organization. Afya provides an environmentally-sensitive, community-oriented solution to help address the critical shortage of medical supplies in underserved communities around the world. Currently, they are working in partnership with US-Ukraine-Foundation and others to support the Ukrainian medical community and refugees seeking aid. Afya’s Disaster Response Hub has been preparing wound care, surgical equipment, and biomedical equipment to medical providers to ensure they have the supplies they need to care for wounded soldiers and civilians.

We look forward to viewing your submissions next year and hope you continue to stay well during these uncertain times.

Questions about the contest should be submitted by email to Julie Scallero at jscallero@hhrecny.org

The 20th Century is often referred to as the “Century of Genocide” and reporting indicated we are continuing this century, as this NY Times article about the recent prosecution and conviction of a former Syrian official of Crimes Against Humanity reveals.

According to NPR News:

The Ottoman Turkish government began rounding up and murdering Armenian politicians and intellectuals. This was the first step in the extermination of more than a million Armenians.

The Nazis began a nationwide boycott of Jewish shops and businesses. This decree paved the way for the “final solution,” the annihilation of 6 million Jews of Europe.

The siege of Sarajevo began in Bosnia.  It was the longest in modern history resulting in the deaths of more than 10,000 people, including children.

On April 7th  the plane carrying the president of Rwanda crashed sparking a genocide that killed at least 800,000 Tutsis and moderate Hutus in only 100 days.

Innocent civilians in Sudan’s Darfur region were attacked; since then at least 400,000 have been killed and 2.5 million have become refugees.

Protests against the Syrian government which began in March intensify and the Syrian army is deployed and fires on civilians.

The International Court of Justice in The Hague has ordered Myanmar to prevent a further genocide of the country's remaining Rohingya Muslims - the target of a brutal army crackdown that led to the deaths of tens of thousands and forced 700,000 to flee from Myanmar to Bangladesh between 2016-2019.

Beginning as early as 2016 Chinese Government officials initiated a cultural genocide against the Uighur and other Muslim minorities in the country's western region of Xinjiang.  An estimated 1 - 1.5 million Uighurs have been held in detention camps for "retraining."  It is believed that many have not been released and have died in the camps.

10 Things You Can Do During Genocide Awareness and Prevention Month

Today, we continue to see evidence of crimes against humanity, including those that continue to occur in Ukraine, and we remain vigilant, as history has shown they are the foundations from which genocides have begun in the past.

ABC News 3/3/22 - Putin has been accused of committing war crimes. But could the International Criminal Court bring him to justice?

CNN 3/3/22 “Everything you need to know about war crimes and how Putin could be prosecuted” - Analysis by Zachary B. Wolf, CNN