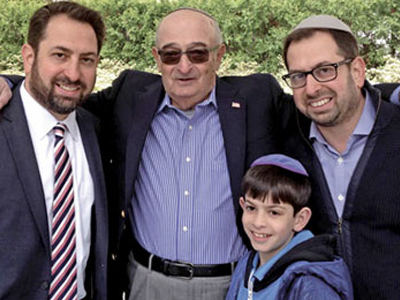 On Thursday May 5, Westchester Day School students commemorated Yom HaShoah in a number of meaningful ways.

Survivor Stanley Berger with his sons and grandsons

The Westchester Day School third grade was honored to participate in the Annual Westchester County-wide Yom HaShoah Holocaust Commemoration at the Garden of Remembrance in White Plains. The program, sponsored by the Westchester Jewish Council and the Holocaust and Human Rights Education Center, was themed “Keeping the Memory Alive: Generation to Generation.”

The program opened with WDS Head of School Rabbi Joshua Lookstein blowing the shofar, and continued with a musical performance by the WDS third grade, led by Mr. Sandy Shmuely. The keynote speaker, Mr. Stanley Berger, a Holocaust survivor and grandfather of five Westchester Day School students, shared the incredible story of his survival through the war. Mr. Berger says he wants to keep the memory alive by continuing to tell his and other survivors’ stories because, “That’s where our future is. They’re the ones that are going to be sending the message to future generations.” Michelle Gewanter, an organizer and Westchester Day School parent, remarked, “The Westchester County Yom HaShoah program was so moving. Stanley Berger shared his remarkable story of survival, reminding us all that we must recount the lessons of the Holocaust to future generations. The impact of his words were magnified by the presence of the Westchester Day School third grade. Led by Mr. Shmuely, the students sang beautifully in both Hebrew and English in front of the bronze gates of the memorial that are inscribed with the Hebrew word Zachor.”

The students of the Middle School commemorated Yom HaShoah in two student-led programs under the direction of Dr. Steven Lorch, Senior Educator in Residence and Middle School ELA teacher. In the morning, a candle-lighting ceremony was paired with readings and songs, and concluded with Rabbi Lookstein reciting the Kel Malei prayer. Later in the day, the students learned about the theme “Bystanders and Upstanders,” which was framed by the essential question: How can people do the right thing even at a time when most people around them are doing the wrong thing? In small groups, they read an account of Oskar Schindler (of Schindler’s List fame), saw a video testimonial by Menachem Katz (a survivor and a prize-winning Israeli architect) about his rescue and discussed the role the elders of the city play in the mitzvah of eglah arufah (the atonement ceremony for an unsolved murder). As part of each learning activity, they responded in writing and in discussion. Sixth grade students led both of these programs, serving as performers during the candle lighting and as facilitators of the study sessions. It was a fitting culmination of their study of “Anne Frank: The Diary of a Young Girl” in their English language arts class over the past six weeks.