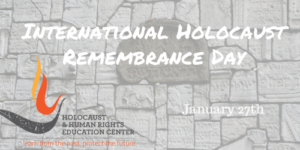 This statement fails to acknowledge the historical fact that the Holocaust was a deliberate and well-calculated state-sponsored effort to systematically eliminate the Jewish people. In other words, to commit genocide.*

This omission undermines the significance the United Nations Resolution that designated January 27—the anniversary of the liberation of the Auschwitz death camp—an annual International Day of Commemoration in memory of the victims of the Holocaust.

Obviously, we should remember with reverence all victims of Nazi terror

As Elie Wiesel said, “Not all victims were Jews, but all Jews were victims.”

We urge President Trump to reissue the statement, recognizing that the purpose of Hitler’s Final Solution was to exterminate the Jews of Europe.

*The United Nations agreed The Convention on the Prevention and Punishment of the Crime of Genocide in 1948. It defines genocide as follows:

…genocide means any of the following acts committed with intent to destroy, in whole or in part, a national, ethnical, racial or religious group, as such: