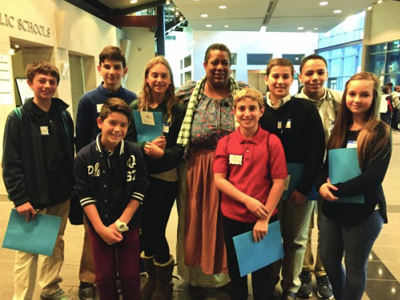 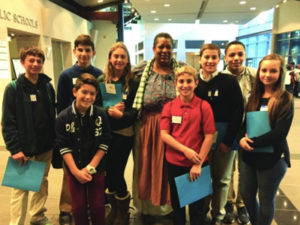 “Betsy Costner” sings a spiritual hymn about freedom as she walks out into the audience of seventh grade students from all corners of Westchester in the auditorium of the Yonkers Riverfront Public Library. Dressed in slave garb, Sheila Arnold who plays “Betsy Costner” a slave from Gastonia, North Carolina, recounts her story working on tobacco and cotton plantations.

Although her story is full of heartbreaking pain, she is able to capture the audience’s attention immediately and relate it to discrimination or struggles that these students might be facing today. Her story kicks off the Second Annual Human Rights Institute for Middle School Student Leaders, which students from 19 public and private middle school students attended earlier this month.

The conference is organized by the White Plains-based Holocaust and Human Rights Education Center (HHREC). The conference’s central themes are respecting the individual and how to be an upstander.
The conference for middle school students was conceptualized after the HHREC noticed that their high school conferences were very well-received, and they felt there was a need to target a younger population. In its inaugural year in 2015, the conference was attended by ten middle schools and 100 students. This year the conference had more than doubled to 200 students participating.

In an election year when racial tensions were at an all time high, a conference like this seems like it should be a mandatory requirement for all students. Millie Jasper, the Executive Director of the HHREC explains the genesis of the conference:

“Why run a day of human rights workshops for middle school students? We feel that students imitate prejudiced and bigoted behavior, and often do not recognize this behavior in themselves. If they see an injustice, they often don’t want to speak up. The Holocaust & Human Rights Education Center wants to lay the foundation for encouraging students to be upstanders rather than bystanders.”

Steve Goldberg, HHREC Co-Director of Education and the Social Studies Chairman in the New Rochelle School District, helped tailor the program to a younger audience; he hopes the conference will help students be “catalysts in their school buildings,” and learn to be upstanders when they see injustice rather than passive bystanders. 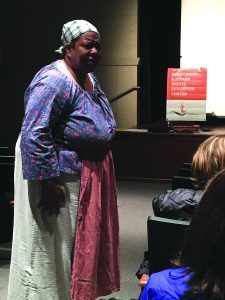 After the presentation by Arnold, students broke out into small-group workshops which were designed to open conversation regarding the themes, “Respecting the Individual and How to Be an Upstander.” The workshops are facilitated by middle school teachers and high school juniors and seniors who were past participants in the HHREC Human Rights Institute for High School Leaders. The conference for the high school leaders is now in its 15th year.

Sami Davidson, a facilitator who is a junior at Somers High School felt it was an honor to be chosen as a facilitator by HHREC. Davidson attended a day-long training session at HHREC and worked on a lesson plan for her workshop which focused on civil rights with a social studies teacher. Davidson “hopes to show kids that there is more than one side to each story and that they need to think of things in a historical context.” At the conference’s conclusion, the students regroup and develop action plans to address injustices. For example, some schools have started Amnesty International chapters or created anti-bullying programs.

Students at Seven Bridges Middle School in Chappaqua also got to see Arnold perform at their school earlier. Arnold has been performing in Chappaqua schools for the past five years and will be at Bell this spring. She said she considers herself a “hors d’oeuvres” that helps to get kids interested in history and humanize it for them.“If I’ve done my job right, there are kids that will leave my performances and start talking and want more information. They will never be able to look at a textbook the same way again because they are now seeing history through a person’s perspective.”